It ended on Wednesday, October 12, the experience of the Techinnova Team at MiCo – Milano Convention Center, the colossal exhibition center that hosted the latest edition of SMAU, the main Italian trade fair dedicated to information and communication technologies, held on October 11 and 12 and once again confirmed as an extraordinary opportunity for startups and companies to meet on the international scene.

During the two days, the working group had the opportunity not only to attend live demonstrations, coming into contact with cutting-edge technological solutions, but also – and above all – to show inside the SMAU exhibition space the main joint R&D projects carried out by the incubator in synergy with partner companies that are part of Techinnova’s extensive international network.

In particular, visitors to our booth – mostly researchers, technicians or CEOs of established companies or promising startups – were shown projects related to the fields of Med-Tech, Sustainable Tourism and AgriFood. Attracted by the sophisticated design of the aquaponic system exhibited by our engineers, the attendees were shown the features of MyPonic, the automated home-use system developed as part of the Aqualife project, with which we aim to improve the physical and psychological state of the individual through the integration of biological and artificial systems.

Counterparts interested in the medical sector, on the other hand, were offered the opportunity to experience our high-tech ROG (Real Organ Generation) software platform, characterized by Virtual Reality and Artificial Intelligence technologies, and aimed at not only educational and training paths, but also diagnosis and surgical simulation. The “testers”, more specifically, were given the opportunity to immerse themselves in a 360-degree virtual environment in which they could interact with the organs and instruments in the operating room. All they needed was to wear a helmet and grab a pair of triggers, before starting to operate in a virtual environment as real surgeons equipped with scalpels and surgical scissors.

There was also no lack of opportunity to introduce the TRATOO project – the smartphone application that offers the possibility, by using advanced GPS localization and Augmented Reality, to directly and quickly enjoy the architectural, artistic and cultural heritage of cities of art – as well as the COMMITMENT project, which led to the development of smart T-shirts functional for monitoring and improving the health conditions of citizens in a conscious and effective way, through a circuit of IoT sensors and an advanced online coaching system.

Further opportunity for discussion and visibility of Techinnova was the participation of Riccardo Roggeri (CEO & Founder) in the Live Show “Innovation 4.0: the cities of the future are here”, which involved national and international speakers. Following a brief company presentation given by each of the speakers, Dr. Roggeri gave a panel that covered topics pertaining to the AgriTech (Aquaponics), Medical (Med-Tech) and Smart Cities (Sustainable Tourism) sectors. Specifically, the conference focused on the new scenarios that the application of technology to these highly innovative areas is inexorably destined to open up: they talked about potential developments in healthcare, the advantages of an aquaponic system over more traditional farming methods, and even the reduction of the carbon footprint as a positive outcome of Sustainable Tourism that is able to combat the scourge of so-called “mass tourism”. 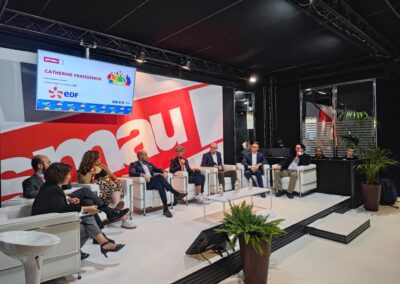 Once again this year SMAU confirmed its ability to bring together distinguished technology experts and leading media, involving more than 120 innovative startups and corporations for this edition. The opportunities for interaction and networking offered by the exhibition event proved to be valuable sources of professional enrichment for the Techinnova Team, which is always ready to enhance its expertise and collaborative relationships on a national and international scale.